Should Mumbai follow Delhi’s Odd-Even formula or adopt a different work-timings approach to solve it’s traffic chokes or perhaps try something else?

Do not waste time waiting for you bus/train. Get real-time commute information on zophop

Even though 2.87 lakh passengers travel from the station daily, it lacks amenities

Contrary to popular perception that stations such as Mumbai Central or Churchgate would be the busiest on the Western line, information obtained under the Right to Information (RTI) Act reveals that Borivali station is the most crowded with around 2.87 lakh passengers travelling from there daily. 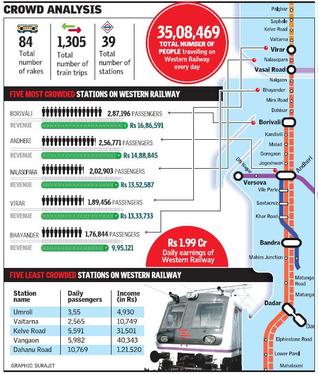 In a clear indication that city’s population is migrating more towards north and even the job centres have shifted, the data explain that the number of passengers at Dadar station are even less than those at Goregaon or Malad or at Kandivli.

RTI activist Anil Galgali had sought information about the number of daily passengers from each of the 36 stations on the western line. With 84 rakes and 1,305 trips, the Western Railway carries around 35.08 lakh passengers every day. One train carries approximately 2,689 passengers.

Mr. Galgali said compared to the number of passengers travelling every day on the western line, the number of trains was very less. “There is a need to increase it immediately to solve this problem. It will also reduce the chances of accidents,” he said.

The Pravas Adhikar Andolan Samiti (PAAS), a mass movement working to increase amenities for train travellers, said the numbers proved that it was high time to fulfil a number of pending projects and increase amenities.

“Apart from increasing the number of trains, several measures such as stopping Bandra trains and taking them till Borivali must be taken. The number of Virar-bound trains should be increased,” said Shailendra Kamble, convener of PAAS.

The number of passengers descending on Borivali is much higher compared to other stations as a large number of commuters from adjoining stations come here to catch a train as it is impossible to board a local train from stations such as Dahisar, Kandivali or Malad. Renovation work currently under way at the station is only adding to the woes of passengers.

Mr. Kamble said considering the growing number of passengers, pending projects such as elevated railway should be speeded up.

“Elevated railway must start from Andheri to Virar, instead of Churchgate. It is because the real hardship starts after Andheri and people travelling further need more comfort,” he said.

This article was originally published in The Hindu.

Mumbaikers  can now use the Jogeshwari – Goregaon Link Bridge which was inaugurated by Sena chief Uddhav Thackeray yesterday.

This bridge is expected to reduce vehicular congestion and reduce bottlenecks for the travellers who commute between the east and west regions. Peak hours have always been a cause of concern for any average user who ends up spending 90 minutes to get to the other side of the road on account of slothful traffic.

Good news for all right?

The Delhi police has issued a traffic advisory detailing diversion of vehicular movement on Rajpath and other roads leading to it, in view of the International Yoga Day demonstration on June 21.

No vehicular traffic will be allowed on Rajpath from Vijay Chowk to Rajpath/Rafi marg crossing till the end of the Yoga programme, said Vijay Singh, DCP of New Delhi district police.

Entry of vehicles may not be allowed on Rajpath from Rajpath/Rafi Marg crossing upto Rajpath/C Hexagon crossing.

Only cross traffic may be allowed on Janpath and ManSingh Road crossing, from 0500 hrs from June 14, he said.

No cross traffic will be allowed on Rajpath/Rafi Marg crossing from 1300 hours from June 19.

Also, no cross traffic will be allowed at Rajpath/Janpath crossing and Rajpath/Man Singh Road crossing, from 2100 hrs on June 20 till conclusion of the Yoga demonstration, the DCP added.

We have solved four of major ten major problems daily commuters in India face, the government should take care of the rest.

An effective public transportation system is a must-must for the smooth functioning of any urban city. But is the current system adequate enough to support the growing needs of Indian commuters?

We don’t think so.

Here’s a list of 10 problems commuters in India face:

2. Really an auto is that cheap here?
Suppose you are new to a city and want to know exactly how much you will be spending while commuting. Well, you can’t plan your expenses as this information will be made available to you only when you reach the metro/railway station or sit in that bus.

3. How far is the bus-stop from my house?
Unless you are willing to ask people around, there is no easy way to know which public commute stop- be it a bus stop or a metro station- is near you.

4.How can I get here Fast??
How do you decide whether you should commute via metro or hire a cab or take a bus while traveling to an unknown destination in your city? You can ask people around for their opinion but can never be sure about it.

5. Crowded trains and buses
Trains and buses can get so crowded and suffocating, you feel like taking a shower after every trip. Sometimes commuters cannot even look outside the window to see the station/stop name and end up missing their destinations.

7. No thanks, I think I will hold it in
Inadequate number of toilets for men and women, non-working flush, wet and unclean floor and poor maintenance are just some of the issues you will face while using toilets in a railway or a metro station.

8. Poor condition of roads
Potholes, water-clogging during monsoons, never-ending construction sites and other issues that impact the condition of roads affect your commuting experience and increase the time taken to reach your destination.

9. Lack of public transportation facilities in residential colonies
So your place of origin or destination happens to be in a residential colony. Be prepared to commute via your own vehicle or hire auto-rickshaws and cabs as chances are that buses would not be plying in these colonies.

10. Traffic Congestion
Due to industrialization and rise in vehicle ownership, our roads have become extremely congested and commuting can be quite a pain especially during office hours.

Stay connected with us